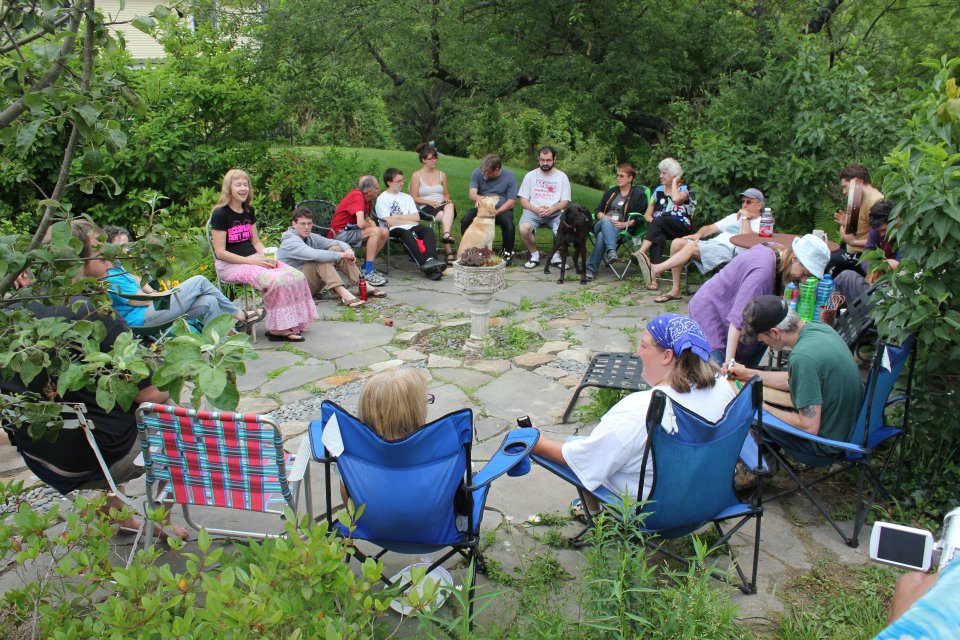 Music, movies, grassroot organizing, and radical change: what do these things have in common, you ask? For starters all of them were present at this year’s first Occupy Main Summer Camp. From young musicians, to screening of tactical documentaries on non-violent protest, to the endless chatter of the general assembly, and beyond, into the realm of gay liberation, from June 22nd to the 24th this weekend was one to remember.

Starting on the 22nd one would arrive at the Summer Camp to find an idyllic setting reminiscent of English fiction and Asian romanticism; the pleasant ponds and carefully mowed grass melded with the rustic architecture to leave a lasting imprint. Walking along the entry path I saw the signs which gave away the camp to the world. From “fire congress” signs to “Bring Our War Dollars Home” demands the atmosphere was unmistakably that of an activist’s world.

At once I set up my tent and registered. When such introductory processes were finished I was glad to discover that instead of name tags for the camp there would be homemade buttons. I instantly made on which displayed my name as well as my political identification. I found that a button was an iconic and unique way to say who one was.

Some hours later, once people had arrived and events began to become ordered, the first highlight of the day started: GA. Though in this session not much was accomplished outside of basic introductions and some talk on what brought each individual to the camp, I thought that holding a general assembly was vital if for nothing more than to keep the atmosphere of occupy alive.

The second highlight of the day came some time later when students from The New School, a democratic education high school, came to screen a documentary that they made pertaining to their experiences in Virginia learning about mountain top removal. The movie, When the Mountains Sound, was well made. For a gaggle of youth one might be surprised at the top quality of the film.

Growing sleepy I retired to my tent for the night after I had watched most of the student’s presentation. When I awoke early in the morning I snatched for myself a breakfast consisting of several banana blueberry pancakes and cupful’s of mixed fruit. Some light conversation eased me into the afternoon.

The first scheduled activity of Saturday was a teach-in about genetically modified foods and how corporations use them to clamp down on independent gardeners. Though the talk was far outside of my expertise zone, so as a result I did not contribute much, I nonetheless walked away from the session with a growing sense of urgency. Action was needed to help secure the transition to non-oil based societies and yet with me knowing little in this field, I wished my organic foods activists good will while they pressed forward with our shared struggle.

By the time this teach-in ended it was time for lunch. Which meant for me it was time to nibble on stale chips while I listened to an indie youth rock band play some of their songs. Each member was perhaps college age, if not younger, yet showed great talent in their musical field. The lead singer hit all of her vocal cues perfectly while the guitarist, drummer, bass and electric piano player dutifully followed suit and complimented her adequately.

Feeling tired of music; however, I felt that it was time for another overly long workshop about an obscure topic. Turns out I was in luck. Soon after the lunch period veteran environmentalists gave a fascinating dissection on their decade long struggle against both the state and corporations in cleaning up what used to be classified as one of the most polluted rivers in the world. Their coalition worked diligently and won several victories eventually winning them the right for river life, such as fish, to have an alternative route of migration. Though I entered that workshop an ignorant individual, I left with a great appreciation for the struggle these people undertook for the rights which all animals deserve.

Next up was the Feminist GA (General Assembly) . With it being my first time attending I did not know what to expect. I was pleased to find out that the experience was worthwhile. After the obligatory round of introductions, in which was the only time I revealed personal details about myself, we separated into two groups: male and female. This was done in an effort to better have each sex understand how patriarchy affects them. Though I was left with the impression that the male group didn’t fully delve into their position of power and how it affects individuals who identify as female, I thought that it was a good first step, especially for those who had never before attended such an event.

At this time, unfortunately, the whether began to turn rotten. The clouds darkened and rain started to drizzle then pour in a hellish downcast. Though I fetched my umbrella from my tent, a structure which I knew wouldn’t hold up well in such a storm, it served little use in actual protection. While attempting to do several tasks for the group I was soaked to the bone.

Drying took a couple hours but within that time the rain had slowed to a steady, but light, shower. With the worst of the storm behind us everyone was stoked to see that after the storm a double rainbow graced us with its beauty. Its shining colors and breath taking magnitude brightened up everyone’s day and showed that after the worst of life there is a silver lining.

Some hours after the halting of the rainstorm I was disposed to return to my tent and check on the damage. I was in luck that despite the heavy downcast my sleeping bag was, with the exception of being a little moist on the bottom when I applied weight, alright. Though my backpack and its accompanying clothes were drenched and the tent bottom wet, I still thought that for the little protection offered by the overhead tarp I came out on top.

So with me being ready to call it a night and rouse myself for tomorrow’s canvassing, I stripped off all unnecessary clothes, and was able to fall asleep rather quickly, all things considered. As I lay in that tiny tent, listening to the patter of rain falling upon my humble abode, I had the realization that this weekend felt like a continuation at my time at the Augusta Occupy encampment; adverse weather, heated arguments, and eating little, and as much as possible, fused to leave an impression which, though not perfect, turned my lingering doubts into a hazy mist of security: Occupy was still alive and if we were going to inflict any real change on the system than we would continue with our actions as long as it took; as long as there is an oppressive government, Occupy will be there.

The next day I left the summer camp in the wee hours of the morning so as to meet my father in Augusta where I was scheduled to canvass the capital with marriage equality activists. Though we had never been to the Unitarian church before, the location in which we were to cooperate from, we had an easy time finding the place. When I entered the Church there was a crowd of individuals. Though many of them wouldn’t stay for the canvassing when I glimpsed the “Mainers United for Marriage” stickers I knew I was in the right place.

After waiting a little while the training session eventually began. Though the initial session, which was for “Pod leaders” was not what I had signed up for it was an interesting glimpse into what would have happened if I volunteered for a leadership position. The insight into being a squad leader made me feel more confident in what was expected. After this session for the squad leaders some more volunteers arrived and so began the second training session for the general canvassers.

The training session went over some very basic lines within the script the organizers gave to us. The proper responses to how people reacted determined how far the conversation went with the person. Prepared responses for religious individuals were also encouraged as it was important to convey that the campaign’s target for this election was communicating the importance of love and commitment within homosexual relationships. The organizers made it explicitly clear that unless the response was completely detrimental we were to continue in conversation with hopes of persuading them into a supportive position.

Once these initial session were completed my partner and I, a nice young women who like me was also shy, went out into the big world to knock on peoples doors, engage them in deep conversation, as well as leave tons of material if they were not home. The day was bright and sunny so we did not have to worry about any negatives raining on our parade (which was good as my clothes were still a bit wet from yesterday’s shower).

Though I was immensely nervous about canvassing for the first time I knew it was work which needed to be done. So I sucked it up and put on my confident mask. Shadowing my partner for the first couple of houses, just to learn the trade, we knocked on the door of our first house. Those who answered were a young man, maybe mid-thirties or late twenties, who ate an apple while his wife, the individual whom we needed to speak with, finished up with the duties which beset her. In the meantime we had a nice exchange with her husband who seemed very intent on trying to get us to think of creative reasons as to why individuals should support gay marriage.

In the end of this first encounter we ended up signing on his wife to our program. As it turned out both were already ardent supporters of our cause. Not only that but when my partner stumbled, as often happens in these high pressure situations, I took up her failing and earned an illuminating shot of praise from our target women’s husband. This not only gave me some confidence for the rest of the day but instilled me with hope that I was, indeed, making a difference.

Still, though that initial encounter was positive that would largely be the only encounter of the day. During the rest of the day we encountered little of our target voters. Indeed it was baffling about how many people were not home so it is aggravating to think back to how many campaign fliers I left on peoples steps. Needless to say I ran out of my hefty bundle without even so much as mild chatting. As nervous as I was to talk with people I can honestly say that about half-way through the day I was earnestly annoyed at the lack of individuals whom I was able to converse with. By the time my partner and I returned to the church, at around five in the afternoon, it was at least comforting to discover that the other teams only had marginally better fortune than us.

So though my first canvassing session ended without much real action I was proud of myself for taking the first step towards practical liberation for my people. Without hesitating I volunteered for the next round of canvassing set to begin On July 8th of this year. I am considering inviting my friend to this event for as the old saying goes: the more the merrier. And when it comes to gay liberation, the merrier the better.