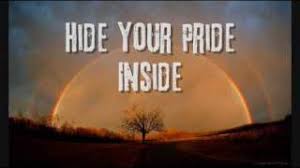 I am always hesitant to listen to any song with the word “incest” in the title. For me it conjures up images of familial sexual intimacy. Something I do not fin very appealing. So upon hearing, some time ago, an older track of Goth-like techno-horror musical artist Damien Zygote, entitled “Rainbow Incest” I was skeptical of its Queer-friendly attitude (to say the least).

The song is over five minutes long. Filled with some telling lyrics and a nearly far-eastern sounding vibe, the song reminded me, for reasons unknown, of author Stephen King’s novel “Misery”. Borrowing influence from local Maine themes, however, the song displays a somewhat bewildering message which I will attempt to shed some light on and whether this is Queer-positive or Queer-negative.

Let’s start with some of the lyrics[1]:

“Slide Another Rainbow Into Your Mouth

Down Through The Cellar Door

On The Basement Floor

What’s The Name Of The Game

That We’re Killing For”

What stands out most of all is the first line: slide another rainbow into your mouth.  It seems to be a reference to homosexuality. What is intended, however, is unknown. The next line, with starts with “dirty Birdy” reminds me of Stephen King’s character Annie Wilks from his novel “Misery” (it is not absurd to believe that Mr.Zygote has a certain amount of affinity for Mr.King living in the same state and being hosted on King’s radio station). The mystery starts with the mouse lyrics indicating that someone is perhaps spying on another person? From here it is not until the fourth lines that another intriguing line starts: a basement is referenced along with murder?

This line is more revealing: someone isn’t being murdered rather is keeping a secret, one that is killing him, or murdering him, on the inside?

“A Smile On A Dog’s Face

Tear Out A Piece Of Your Soul

And Hide It Inside”

The latter lyrics in this verse are more of a regurgitation of what we previously know (someone is keeping a terrible secret that is eating away at them) so it is the former lyrics that are worth noting; appearances can be deceiving and so the words state: “A smile on a dog’s face don’t mean it won’t bite”. One could interpret this as a person, our secretive protagonist, is keeping up with the world only through fake appearances; our un-named man seems nice but actually have some vigor to him.

“A Kiss From A Snake’s Tongue

Will Keep It In Mind

So I’m Laughing Inside”

The first two lines here can be discerned as anything. They could be simple conjecture or they could be homophobic descriptions. What is clear, however, is the final two lines concern someone, this observer, restraining his thoughts so as to continue watching. This could also be a wider statement on how many heterosexuals view homosexuals: tolerance, they keep their negative thoughts inside to accommodate political correctness?

Where The Rainbow Goes”

The unnamed observer desperately wants to know something. This must be taken in with the first line of the song (“Slide another rainbow into your mouth”). The task seems to be figuring out what this so-called rainbow means, what it represents. It could be many things but sexual innuendos come to the forefront.

“They’re All Gonna Laugh At You

They’re All Gonna Make You Cry

They’re All Gonna Laugh At You

A fascinating section, we now come closer to the meaning of the song, maybe? The omniscient narrator is parroting results deduced by our “mouse” observer. He implies that if these two people, who are engaging in homosexual acts in a place (“a basement floor”), go to the public with their love they will be ridiculed. Knowing this it is best to keep their orientation pride, their rejection of hetero-hate, on the inside.

“Take And Break Another One

Is It Something Really Fun

I Don’t Know Anyone

Who Really Knows It

Maybe In Another Life

You Can Try To Choose A Side

Now our observer is making inner remarks. He muses about how he doesn’t know anyone else who engages in such, presumably, sexual acts. More importantly he endorses the correct, and scientific, fact that one’s sexual orientation is unchangeable and set from birth (“Maybe in another life you can choose a side”. He finishes off this verse with a positive statement of “you will like it”.

“Some Of These Things Are Not The Same

Some Of These Things Are Alike

Learning Too Much Can Be Such A Shame

Finishing off his song Mr.Damien sings of uniqueness. Stating that “some of these things are not the same… [and] alike” he is endorsing diversity and attacking the heteronormative culture of Americana.  The last lines are perhaps the most revealing as they might be defined as a social-statement: the populace is queerphobic and learning too much, learning to accept, is, sarcastically, a shame so it is better to close one’s mind and live in ignorance (who wants knowledge anyway?).

These last lines could easily be homophobic, an endorsement of ex-gay “reparative” therapy (learning to be heterosexual?). Yet coming from his tradition, his locale, and from how the previous song proceeded, this seems unlikely.

Returning to “square one” we must examine the word “incest” to truly understand the meaning of this song. Dictionary.com[2] defines incest as sexual intercourse between closely related siblings. So with this in mind, and with the examinations of the verses, we can now say, within a reason of a doubt, that this song is about two same-sex family members experimenting with their sexual urges and society’s innate prejudices towards such people. The lyrics hint at a very Queer-positive depiction (if not somewhat condescending).

Personally I do not endorse sexual relations between family members but neither do I condemn it (so as long as it is between two legally consenting adults). It is, in short, not my cup of tea. And while it is a type of song one would never hear on the mainstream radio stations, for a local artist who is trying to make a name for himself, it is a perfect substance; edgy, different, and new, it shows, at the minimum, that Mr. Damien Zygote is unafraid to tackle oceans of creative grey.

To judge for yourself whether Mr.Zygote’s track is homophobic or not listen here…

[1] For this article the lyrics have been taken from the lyrics data-base “Lyricsmania”: http://www.lyricsmania.com/rainbow_incest_lyrics_damien_zygote.html