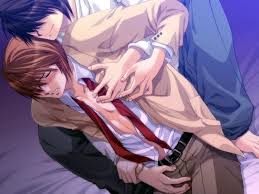 One could say I am a fan of anime. Not a huge fan, mind you, but enough to say I have watched through the Dragonball Z series from start to finish, devoured Inyuasha, Bleach, Fullmetal Alchimist and others. So needless to say I have been a fan of Death Note form the very beginning. This being said it is only recently on my fifth (or so) playback that I noticed the moderate amounts of homoeroticism inherent in Death Note.

There are several instances where this gay tract is revealed. Some are subtle others not so subtle. An example of the not so subtle variety can be seen in the first season where REM reveals that if Light attempts to kill Misa she will, in turn, kill Light. She does this in order to protect her but moments before this is said there is an exposition which details that the only way to kill a Shinigami is to make them fall in love with a human; once in love they are susceptible to prolonging that person’s life but preventing their intended death. The consequence for doing so is death for the Shinigami.

So we see that REM has romantic feelings for Misa. The show’s first, and only, Lesbian pseudo-romance.

Later on we can begin to question Light’s sexual orientation. We know from early in the show that Light is a brilliant student with a strong sense of justice. Yet he is also brutal and cunning, he harbors delusions about creating a perfect world and is determined to bring this dream to reality. To this end he will utilize any means necessary, including using Misa’s infatuation with him as a controlling tool.

He is seen with several woman throughout the course of the show yet through it all the audience never gains the impression that the women he dates are anything more than business partners. He plays several women against each other and, ignoring a contrived scene where he looks at “dirty magazines” in order to fool spy cameras, never is he intimate with a member of the opposite sex.

This isn’t to say that he is seen to be genuinely intimate with members of the same-sex. However, when taken together with several occurrences throughout the show the question of Light’s sexuality comes under some scrutiny. By this I mean his friendship with “L”.

While it is obvious to anyone that Light hates “L”, as L is attempting to imprison Kira, him, as the investigation drags on, and the intensity boils, one can begin to sense this strange almost frustrating tension between the duo. For example, beore “L’s” death when he is standing atop the team’s headquarters in the pouring rain and Light comes to drag him back in-doors, there comes a scene soon after where “L” is dying off Light’s feet while musing about their “freidnship”.

This scene can be interpreted in many different ways, including religious. It could also mean nothing more than a dramatic lull in the story to showcase “L’s” complete acceptance of defeat. Still, this scene, and their whole dynamic in general, takes on a wiser importance come the series conclusion.

By the end of the second season Light has been revealed to be Kira: his plan to create a utopia has failed and so, bleeding by the hand and clearly deranged, he flees his persecutors. Struggling to a nearby warehouse Light rests on an iron staircase. As Ryuk writes his name in his notebook, thus killing him, Light, in his final moments, sees “L” standing before. A smile crosses his face and before long he passes.

We may never know for sure if this tentative friendship between two genius detectives who never showed much of an interest in the opposite sex was anything more than an awkward gesture between men or if it was a suppressed love. Yet we can say that it raises some eyebrows if one thinks hard enough. In addition with the love shown by REM (the one definite homosexual attraction) we can see that the show was not all together devoid of same-sex romance, so it would not be much of a stretch to say that, had some more details been provided, a romance could have been possible between Light and “L”.

In any case, whether Light and “L” were straight or gay Death Note is a provocative show. The dialogue is well written and the plot is something, while fitting into Otaku convention, takes the viewer on a stimulated and suspense filled ride. True to my word the only real criticisms I have of the show is that there has yet to be another series.